“Have you got any Amarone?” When the weather turns snowy and wintry many think about Amarone, the rich, deep and very alcoholic red from near Verona in northeast Italy. Yes, we have Amarone. When we first visited bear-like Roberto Mazzi and his sons a decade ago, we were invited to eat in their agriturismo restaurant, an informal weekend restaurant. It was one of those 8 course meals you think you may not survive. We were in trouble long before the climax of the savoury courses, their signature Risotto with Amarone. And having finally managed to choke that delicious plate down (just), a soup appeared (soup, after main course?)…and then dessert. It was a gourmet emergency.
They make two Amarones; Punta di Villa, the more elegant of the two (if you can describe a 16% wine as elegant- more like a boxing glove made from eider feathers?), the other, Castel doesn’t pull any punches. Then two beautifully breezy, survivable, truly elegant Valpolicella Classico Superiores; Sanperetto and their Cru, Poiega. Both made from 70% Corvina, 25% Rondinella and 5% Molinara, high-class, elegant Valpolicella evocative of sour cherries, bitter almonds, violets and pepper. They also make a delicious red dessert wine, Recioto della Valpolicella called Le Calcarole. If you need a wine for a chocolate dessert, look no further. 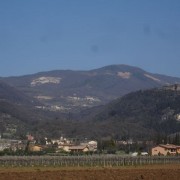 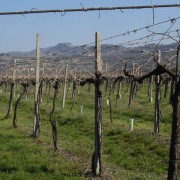 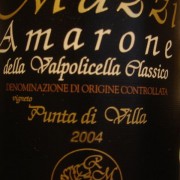 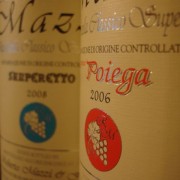