Top Mosel growers Clemens and Rita Busch had asked two times running “have you tasted at von Racknitz recently?” No, not recently. “You have to go there, the wines are getting really good!” So we looped through the Nahe to check them out. Formerly belonging to a historic cloister, the estate has a long history traceable back to Hildegard of Bingen back in the 1100s. There have been ups and downs though the centuries to the point where the winery was on the brink of collapse in 2002. Enter Matthias Adams, former CFO of Tech company Infineon Germany. Then in his late 30s he decided he wanted a career change, jacked-in his high-powered job and spent a year walking around the Black Forest. A friend at a large consultancy firm phoned him up and said, “there’s a job come in, it’s too small for us. Can you take a look at this winery, see if there’s anything you can salvage?” What no-one could have foreseen was that Matthias and Luise von Racknitz would fall in love and that together they have turned the estate’s fortunes around.

Luise takes care of the cellar and their two small boys, Matthias looks after the books and their vines. In addition to the lions’ share of Kloster Disibodenberg (which used to belong to the cloister), they have parcels in the great historic Nahe vineyards of Niederhauser Klamm and Hermannshohle, and the less well-known Schlossbockelheimer Konigfels, where local old-timers say the snow always melts first. Luise didn’t quite understand why Matthias had to buy the parcel in Traiser Rotenfels over 20kms away.  It’s the one piece of Rotenfels at the bottom of the red cliffs, right next to the Traiser Bastei and gives a completely different minerality to their other wines. Opulent, dizzy, almost tropical.

“What’s in those big old barrels Matthias?”
“Er, nothing.”
“Are they empty?”
“Er, no.”
“Are they filled with water, to keep them in condition?”
“Er, not exactly.”
“So, what’s in them?”
After an exciting Riesling tasting, Matthias was showing us the old cellar with gleaming new stainless steel tanks, when we spotted a row of big old fuders, the classic old oak barrels that you see in Germany.
“So, what’s in them?”
“OK, it’s an old red wine of my father-in-law’s. It’s Schwarzriesling (Black Riesling) – Pinot Meunier.”
Intriguing. Pinot Meunier is used in France as one of the main three grapes in Champagne. You don’t often find it bottled separately and, even more rarely, as a still red wine.
“Would you like to taste it?”
“Yes please.”
Fascinating to find Pinot Meunier in the Nahe, also to find a very mature, very drinkable stash. After a bit of to-ing and fro-ing Matthias and Luise agreed to bottle a fuder for us and let us choose the labels. Mature Pinot Meunier from the Nahe? Oh yes. 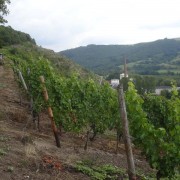 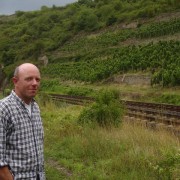 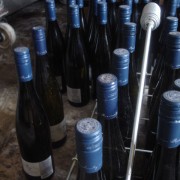 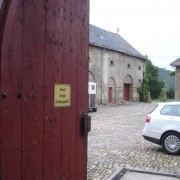 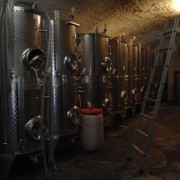 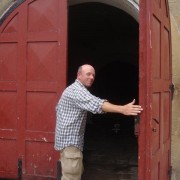 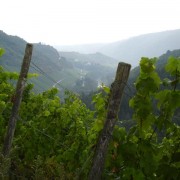 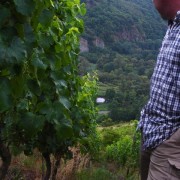 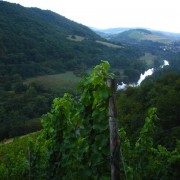 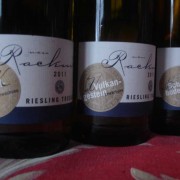 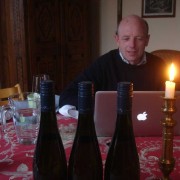 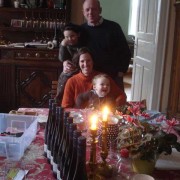 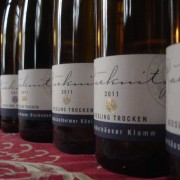 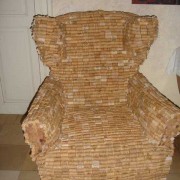 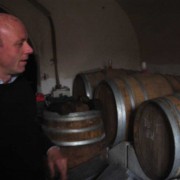 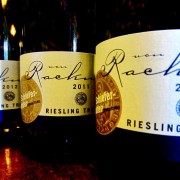 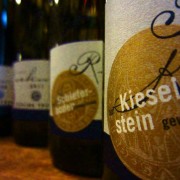 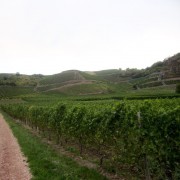 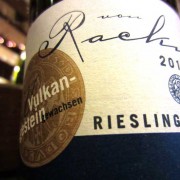 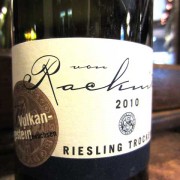